How to Know if You Have Chronic Inflammatory Response Syndrome? 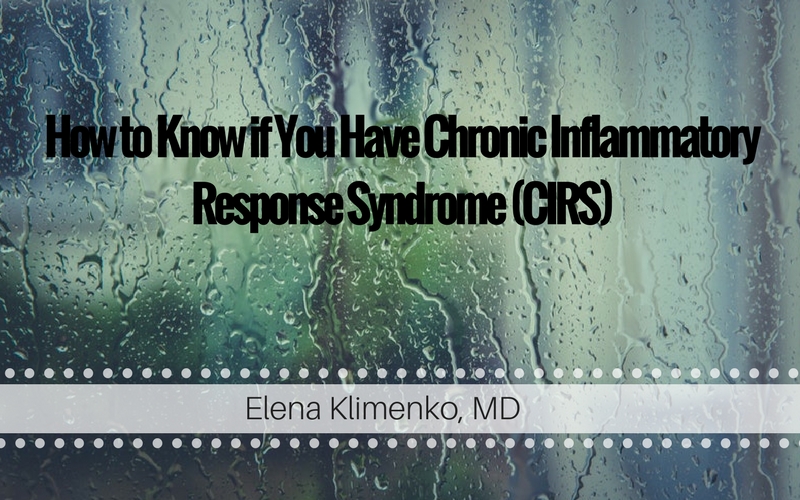 14 Feb How to Know if You Have Chronic Inflammatory Response Syndrome?

Illnesses caused by biotoxins are on the rise. Since I’ve begun testing my patients for Chronic Inflammatory Response Syndrome (CIRS) markers in my practice, I’m surprised at just how prevalent this condition is turning out to be.

Up to 25 percent of the population is thought to have the gene HLA, which makes them more susceptible to biotoxins. Though anyone can be impacted by biotoxins, these people are much more sensitive and therefore more likely to have symptoms strong enough to send them to the doctor.

Part of this apparent uptick in biotoxin illness is also due to the improvement in diagnostics. We are realizing the body’s reaction to mold, Lyme, and other biotoxins are unique in each person, which is partly why strategies for identifying and correcting these problems have remained largely underdeveloped until recently.

If you’ve been struggling with chronic health issues, you may want to consider getting yourself checked for Chronic Inflammatory Response Syndrome.

So what is CIRS? Chronic Inflammatory Response Syndrome or CIRS is a condition with a wide range of symptoms which are triggered by a biotoxin – usually mold. The term CIRS was coined by Dr. Ritchie Shoemaker to describe when a body’s immune system is out of whack. In some people this could mean the immune system is simply weakened, while in others it’s running rampant.

You can also get CIRS from common chronic sinus infections with MARCONS and tick borne illnesses like Lyme disease ticks, fish that’s been contaminated with ciguatera, and infections from a brown recluse spider bite. Essentially, CIRS is a dysfunctional reaction of the body’s immune system in response to a biotoxin. In my practice, I’ve seen the symptoms range from manageable to debilitating.

The different markers that we can test for, and the differences in how symptoms present, make CIRS a difficult condition to diagnose. Though diagnostics are improving, there still needs to be a cluster of symptoms and an improvement in treatment response for a CIRS diagnosis to be made.

Unfortunately, it’s not unusual for a person with CIRS to go years, even decades, without a proper diagnosis. However, if we can pool our knowledge and spread the word about the differences in this condition, I believe we can make a major difference in awareness and treatment of CIRS. This is part of the reason I’ve begun testing most of my patients for biotoxins and CIRS markers.

Waiting For A Diagnosis Might Not Be The Answer

There are numerous symptoms of CIRS, different biomarkers, and the toxins also differ. This complicates the diagnostic process and is part of the reason CIRS has gone largely ignored by conventional medicine. But just because an illness is complex and not fully understood, it doesn’t mean we should shy away from helping people heal – we just need to adjust our approach accordingly.

Testing and treatment often have to happen side by side when tackling CIRS. Sometimes the response to different treatments actually help in achieving a complete diagnosis. Symptoms, biomarkers, and testing must be used to correctly diagnose CIRS.

Some common symptoms of CIRS include:

If you have some of the symptoms associated with CIRS, you should make an appointment with a doctor who is experienced in dealing with this condition. If you’re in need of a New York certified functional medicine doctor, you can request a consultation here.

Testing for Chronic Inflammatory Response Syndrome Due to Mold

CIRS due to mold exposure has a couple of characteristic markers, including high levels of

CIRS due to mold exposure is characterized by low levels of:

There are several tests that can help you identify if mold is the cause of your inflammation, and therefore your symptoms. These tests are useful If you suspect you have CIRS, I recommend the following:

If you believe your symptoms might be caused by chronic inflammatory response syndrome, it’s so important that you make an appointment with a doctor familiar with this condition. I can’t tell you the number of times I‘ve seen patients who have gone from doctor to doctor trying to find the cause of their symptoms.

When CIRS is the suspected culprit of your symptoms, there are a number of things that can be done right away to ease your struggles. Intervention and remedies like eating specialized diets, taking supplements that support natural detoxification, sauna therapy, and mold remediation can help those with CIRS.

If you are in need of a New York functional medicine doctor who is experienced in CIRS, you can request a consultation here. Don’t wait until this condition becomes worse, you can begin the path to relief today.